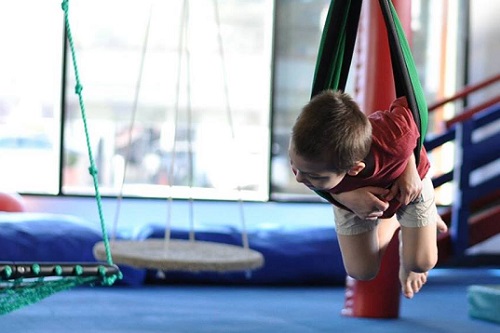 A purpose-built gym designed for children with special needs, with customised equipment including slides, swings and ziplines has opened in the Melbourne suburb of Sydney West.

Equipment in the Australian-first gym, We Rock The Spectrum, a franchise of the USA brand, has been designed by occupational therapists with the aim of aiding the sensory development of children with processing disorders, while providing additional motor skill development.

Local mother, Sally Johnson and master franchisor behind the Sydney West opening and was inspired to bring the concept to Australia after seeing the benefits first-hand.

She explained “within my own special needs community, I see the desire families have to connect with one another.

“I also see how great families feel when they know their children are benefiting from activities that help them regulate their sensory needs, while having fun.”

Johnson’s son Digby was diagnosed with Autism and ADHD at age two, and the pair struggled to find play centres where he felt included.

After learning about the We Rock The Spectrum model, Johnson traveled to the USA to see the gyms for herself, meeting with founder Dina Kimmel, who shares a familiar story.

Kimmel developed the specialised concept in 2010 after her two year old son, Gabriel was diagnosed with Autism, allowing families with special needs children to engage in sensory-beneficial activities.

Now in its fourth year of franchising, We Rock The Spectrum has over 70 locations across the globe, with the Sydney West opening marking the third international franchise and first for Australia.

While franchising some sectors of the fitness industry is seen as reaching saturation, the We Rock The Spectrum model caters to a traditionally under-represented market.

According to a recent study from AMAZE, Victoria’s peak body for Autism Spectrum Disorder, only 4% of autistic Australians feel their community knows how to properly support them.